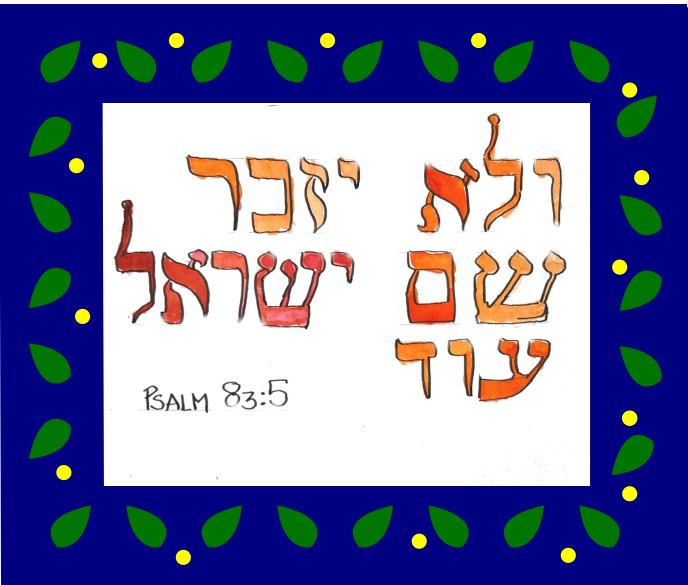 When you are feeling down, what do you do? Do you call a friend? Look for someone with whom to speak? You might try out speaking to G-d. You can start with Psalm 83. These lines from Psalm 83, 3 to 9, describe what happened during Hitler’s reign of terror.

Hitler was able to use as his rallying cry: “Let us cut them off from nationhood, so that Israel’s name will be mentioned no more.” (83:5) He succeeded to unite the military, business, academia, and religious communities behind him simply by saying that all the German post World War I economic and social problems were the fault of the Jews. By using this basic theme in all his speeches, he was able to “take counsel and make a covenant against you.” (83:6).

Hitler’s basic goal was to kill every last Jew in the world. To destroy everything created by any Jew: art, books, and music, no matter how religious or secular, so there would be no trace of any Jewish existence. Felix Mendelssohn was converted as a child more than one hundred years before Hitler came to power, but his popular music was banned. The success in this plan would lead to the eventual conquest of the whole world, the building of a one thousand year Reich, and finally the crowning of Hitler as a god. He must have realized by instinct that as long as one Jew is alive, like Abraham in the time of Nimrod, that someone would point to him and say: there is a G-d who created and runs the world, and his name is not Nimrod, Pharaoh, Haman or Hitler.

This war against the Jews succeeded in rallying all of the major countries of the world with a single mind to strike a covenant against the Jews. Psalm 83:7 lists all the countries who “became the strong arm of the sons of Lot.” Whether the countries were allied with Hitler like Italy or Japan; whether they were conquered like Poland and France; whether they were neutral, like Turkey and Cuba: they agreed with war against the Jews. The United States and England, who put so much ‘blood, sweat, and tears’ in fighting to destroy Hitler, did not want to recognize the Jewish problem and refused to save any Jewish lives. England was the only thorn in Hitler’s side from May 1940 to June 1941. The English population suffered years of bombing from Germany. Thank G-d the English never gave up under so many hardships. Churchill commented that had Lord Halifax been designated Prime Minister instead of Churchill, we would all be speaking German now. Yet England caused a ship carrying almost one thousand refugees to sink rather than allow the ship to land in Israel.

Hitler’s main goal in attacking Russia was to destroy the Jewish population in Russia. He had a treaty with Stalin; Hitler got trainloads of supplies for his war machine. He diverted his army from pushing on to Moscow so that the army would go to Kiev and cause the most destruction to the Jewish population.

They say, “Let us wipe them out as a nation;
Israel’s name will be mentioned no more.”

The Psalm speaks in present, past, and future tenses. The intention of Hitler was to declare himself to be a god. In order to accomplish this, he attempted to destroy every single Jew. He was somehow aware that as long as there was one Jew alive, the message to the world would be there is one G-d who created the world and runs the world.

A question often asked about World War II is: Where was G-d?

Ultimately, Hitler was defeated. When you look at many details of World War II events, you can see many times Hitler and the Axis powers came within a hairsbreadth of winning. However, a picture also emerges of a guiding hand that prevents the natural forces of evil to achieve their goal.

And what of today’s events? Are Hitler’s descendants once again regaining power? If life feels over-bearing, remember God is hidden. We do not know how the story will end, but we can place faith in G-d.