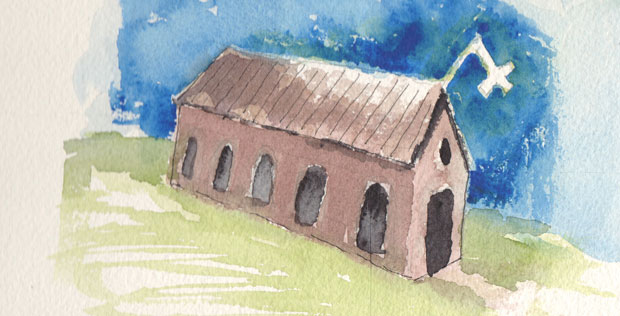 The biggest deception about World War II in the English-speaking world is the word swastika. The use of the meaningless word was a good way to hide Hitler’s destruction of the basic symbol of Christianity, with the approval of the Vatican and most leaders of the religious community. The Nazi symbol in German is hakenkreutz, which means a hooked or crooked cross. The Hebrew is tzelev hakares, a bent crucifix. In this post we will learn about how the Catholic Church and the majority of German religious leaders moved away from traditional Christianity. Only a few Christian leaders sounded an alarm about this nefarious transition. The chopped cross is a fitting symbol of the new Nazi approach to religion.

Transformation of the Church

In The Hitler Salute sociologist Tillman Allert describes how the Christian leaders remained silent, as they seemed to agree with Hitler’s fight against the Jews and the Communists. German churches used to say Gruss Gott (bless G-d), but in the 1930s instead this was crossed out and replaced with Heil Hitler. What caught the eye of traveler Samuel Beckett in 1937 was the replacement of the word “G-d” with the name of the Fuhrer. The Nazi transformation of a simple human interaction–the greeting– demonstrates how a shared gesture can usher in the conformity of an entire society. “Made compulsory in 1933,” Samuel Beckett describes in his diary (see Samuel Beckett’s German Diaries 1936-1937) “the Hitler salute developed into a daily reflex in a matter of months, and became the norm in schools, at work, among friends, and even at home. Adults denounced neighbors who refused to raise their arms, and children were given tiny Hitler dolls with movable right arms so they could practice the salute. And, of course, each use of the greeting invested Hitler and his regime with a divine aura.”

From
Out of Step: My Young Life as a Resister in Nazi Germany by Gisela Dewees (Publisher’s Preface)

Imagine you are a German citizen in Berlin in 1940. The altar in your church is covered not with the usual paraments, the cross, the Bible, or the presence of the German flag, but with a sword, a standing copy of Adolf Hitler’s Mein Kampf, and the swastika. Your pastor is no longer allowed to preach, for the intention of the State is to have pulpits used for orations given by agents of the Third Reich. Hitler’s ultimate goal was to replace all current religion with the ancient Germanic gods of Odin, Thor, and Freia.

Gisela Dewees wrote the book about her father, Pastor Wilhelm Hamisch. He was part of a small group along with Martin Niemöller and Dietrich Bonhoeffer called the Confessing Church who were opposed to the Hitler-supported Reich church. They were all arrested, and Bonhoeffer was killed days before the end of the war because they had no support from the top church leadership.

The Third Reich and the Catholic Church

History vs. Apologetics: The Holocaust, the Third Reich, and the Catholic Church, David Cymet writes how the Catholic Church and the Nazi party drew closer as Hitler’s popularity increased. At the ratification of the Concordat in Rome, a commitment not to interfere with the Nazis’ ‘Final Solution’ to the ‘Jewish Question’ was traded for a verbal promise from Berlin to exclude the baptized converts. This the Nazis also violated when Eva Stein, who had been a practicing nun for many years, was sent Auschwitz.

While the Nazi government violated the Concordat at every turn, the Church kept zealously its promise. Pope Pius XII never mentioned the persecuted Jews by name and denied any knowledge of the annihilation of the Jews. Even after the war, Pius XII refused to condemn anti-Semitism and Germany’s role in the Holocaust. Instead, the Vatican engaged in the protection of genocide perpetrators and assisted in their mass escape.

One of the reasons Nazism succeeded was it knew how to play well with the Church. Hitler differed from the Communists, his biggest foe at the time, in tactics with regard to religion. Communism said that you cannot go into a house of worship even to get married. Nazism left the churches open and completely changed past religious practices. The doors of the churches used have a sign Grüß Gott (bless G-d). Now the greeting sign was Heil Hitler (holy Hitler). The bible was replaced by the book Mein Kampf.

The author Karl Heinz Deschner re-published his book God and the Fascists after fifty years. He wanted to counter the disinformation put out by the Vatican. The Vatican collaborated not only with Hitler, the greatest criminal of all time, but also with other fascist leaders. The Vatican has been trying to position itself as an anti-Hitler organization for decades, although according to Cardinal Faulhaber, Pius XII was the best friend of the New Reich at the beginning, especially in the unstable initial phase in National Socialism, when history could have taken a completely different course.

Institutionalization of a De-Judaized German Church

The Institute for the Study and Eradication of Jewish Influence on German Church Life was founded in May 1939 in Warburg Castle in Germany. The official opening included Protestant theologians, pastors, and churchgoers. The Institute goals were both political and theological:

The Institute redefined Christianity as a Germanic religion whose founder Jesus was no longer a Jew. Instead Jesus in their view had fought valiantly to destroy Judaism, falling victim to that struggle. Germans were now called upon to be the victors in Jesus’ own struggle against the Jews. On the theological level the Institute achieved remarkable success, winning support for its radical agenda from a host of church officials and theology professors who welcomed the removal of Jewish elements from Christian sculpture and liturgy and the redefinition of Christianity as a Germanic, Aryan religion. “Aryan” meant not simply a physical or biological body type; it was an inner spirit of great power and at the same profoundly vulnerable and in need of protection from the degeneracy threatened by non-Aryans, particularly Jews. They worked on resolving a problem of Christian theology: how to establish clear and distinct boundaries between the earliest Christianity and Judaism as well as eliminate all traces of Jewish influence from contemporary Christian theology and practice. Wishing to deprive the Jews of the Semitic affiliation of Jesus, they claim his father was Panthera, a Roman soldier. The dissociation of Jesus from Judaism functioned for some as an affirmation of German identity or simple contempt for Jews, while for others it was a genuine effort to uncover new intellectual genealogies of religion in an era of new enthusiasm for the Orient.
Source: The Aryan Jesus: Christian Theologians and the Bible in Nazi Germany, Susannah Heschel, Princeton Press, 2008.

The Young Priest Who Stood Out

In his book Nazi Terror, Paul Johnson shows a clear picture of the role of the church through a biography of a young priest, Josef Speaker. In 1934 this young priest defended his religion through a sermon. He tried to say that we have a god, and his name is not Hitler. For this he was thrown into a concentration camp where he almost lost his life from the treatment of fellow “civil German-speaking men.” Friends managed to smuggle him out of the country. When he wanted to rejoin his religious community, he was treated as a “black sheep” and banished to a remote area in South America. His most valued complaint was that during his ordeal, not one of his peers or higher up officers of the church came to his aid when he was trying to defend the religion.

From a Jewish point of view all this revelation about the Vatican is not surprising. Psalm 83 alludes to Hitler inviting the world to eradicate Israel: “Destroy Israel so that not even a memory would be left of Israel.” All the world political and religious leaders joined him, united with one heart. The first country listed in Psalm 83 who joined the fight against G-d is Edom (Christianity). Hitler completely destroyed the principles of the Christian religion. The churches remained open, but the Nazi symbol of the hackenkreutz, the chopped or broken cross, replaced the cross on the altar.