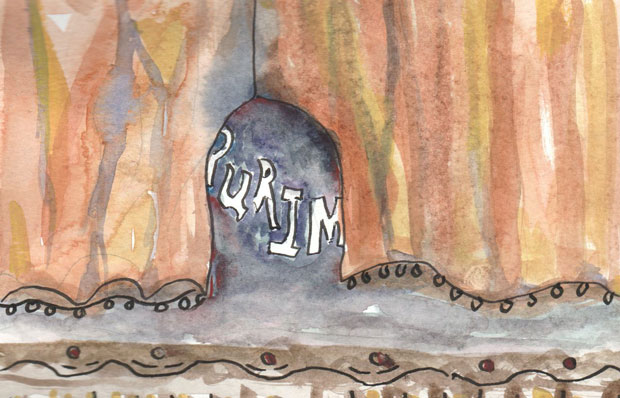 There is a folk tale that all the Jewish holidays got together and decided to oust Purim from their club. They claimed they all had Hebrew names; Purim, however, has a Persian name meaning “lots.” Purim wanted to belong, so he attached himself to other holidays. On Yom Kippurim (a day like Purim) our individual fate is decided. On Purim the fate of all Jews was decided. Purim and Chanukah share the prayer of the Al Hanisim(on the miracles — said during prayer services and as part of Grace After Meals). On Chanukah the miracle of the long lasting oil was supernatural. The Purim miracle occurred when ordinary incidents fell into place, which ‘coincidentally’ saved Jewish lives. On Shavuos (the Feast of Weeks that celebrates the giving of the Torah at Mount Sinai) the people united in saying ‘naaseh v’nishma,’ (we will do first then we will listen) — we accept the Torah. On Purim the people agreed to fast and pray. Purim also gave us the Purimspiel (Purim play) to be played out as an ongoing part of Jewish history.

So how does this relate to World War II? During a war, you hear the term: theatre to describe the battlefields. Shakespeare wrote the famous line: “All the world is a stage.” All the world is a purimspiel. A purimspiel is a short, satirical play enacted on the holiday of Purim. We live in grand purimspiel; what happens in one part of the Jewish world effects the rest of the world too. The terms used for World War II events were theatrical in nature: the European Theater and the Pacific Theater of Operation. When Hitler set out to destroy Jewish lives, millions of people were eventually killed all over the world.

The name of our worldwide Purimspiel is Megilas Esther (the Scroll of Esther). The two words seem to be a contradiction. Megilah means “that which is revealed,” and Esther is translated as “I will keep secret” or “I will hide.” The Megillah is like a playbill for the story of Purim. What is revealed in the playbill besides the name of the play is the story line or plot. A king celebrates his new power. A minister wants more power. The king gets drunk, which leads to a series of incidents that threaten to destroy Jewish lives. But the Jews survive. It is not revealed, but G-d is the author, director, and producer of the purimspiel. G-d hires the stars, supporting actors, and extras to enter and leave the stage. Sometimes the stage is darkened, so the audience does not see the movements on stage, but action is always taking place under G-d’s direction.

History records the story over and over, but different actors are center stage. The same phrases were used by Pharaoh in Egypt, by Haman in Persia, and by Hitler in Germany. Other ancient stories are also repeated in modern history. When Abraham was the only Jew in the world, Nimrod felt threatened enough to throw Abraham into the furnace — the first Auschwitz. Later in Jewish history, Chananya, Mishael and Azarya did not fear Nebuchadnezzar when he threw them into the furnace. The same speech that Pharoah gave around 3,500 years: “there is a certain people — they are too numerous and strong. Let us outsmart them lest they destroy us.” Haman used the same words to justify a decree to destroy every Jew in the world. Today similar words are said by the ruler of Iran. In modern history Hitler used these words to instill so much hatred against the Jews that a modern, ‘civilized’ society readily accepted the concept of the necessity of killing every last Jew in the world. The observance of Purim in the Polish ghettos was reminiscent of the Jewish holidays during the time of the Inquisition, when Jews in Spain gathered in basements to serve G-d in hiding. Hitler banned the reading of Megilas Esther. He may have instinctively known that he would eventually suffer the same fate as Haman.

World War II was a total war against every Jew. Hitler lit the match to start the war, and then all the political and religious leaders in the world joined in the effort. Hitler’s book, “Mein Kampf” (My Battle) was the decree. Just as G-d orchestrated Haman’s decree, the same can be said for Hitler’s book. Adolf Hitler was unsuccessful in the first half of his life, an outsider. He received a medal for his wartime service in World War I, but he did not get promoted. In 1924 he was jailed for trying to revolt against the government. While in jail, he wrote his book. Suddenly, he became a magnetic figure who eventually managed to control Germany. G-d put him in this position of power.

Hitler not only wanted to destroy every Jew, but he tried to destroy every Jewish religious item, book, or music. Even the statue of Felix Mendelssohn, a Jew who had converted 100 years earlier, had to be destroyed. Hitler did not say: “Today Germany, tomorrow the world, then I can set up my 1000 year Reich, and then I will destroy the Jews.” His first priority was to destroy Jews and Judaism. For that, he was declared a god figure. Referring to World War II and the Holocaust, people often ask: “Where was G-d?” G-d was hidden behind the curtain, fighting the evil perpetrated on the Jews. The 1000 year Reich only lasted 12 years. Every day of that Reich caused unspeakable misery to the Jewish people and many lost lives. But ultimately Hitler was defeated. His ultimate plan did not succeed. When you study World War II events in detail, you learn how many times and in how many ways Hitler and the Axis powers came within a hair’s breadth of winning. A picture emerges of a guiding hand that prevented the natural forces of evil from achieving their goal.

In Megilas Esther there is no direct mention of G-d. But the message is that G-d is control. G-d conducts the show.