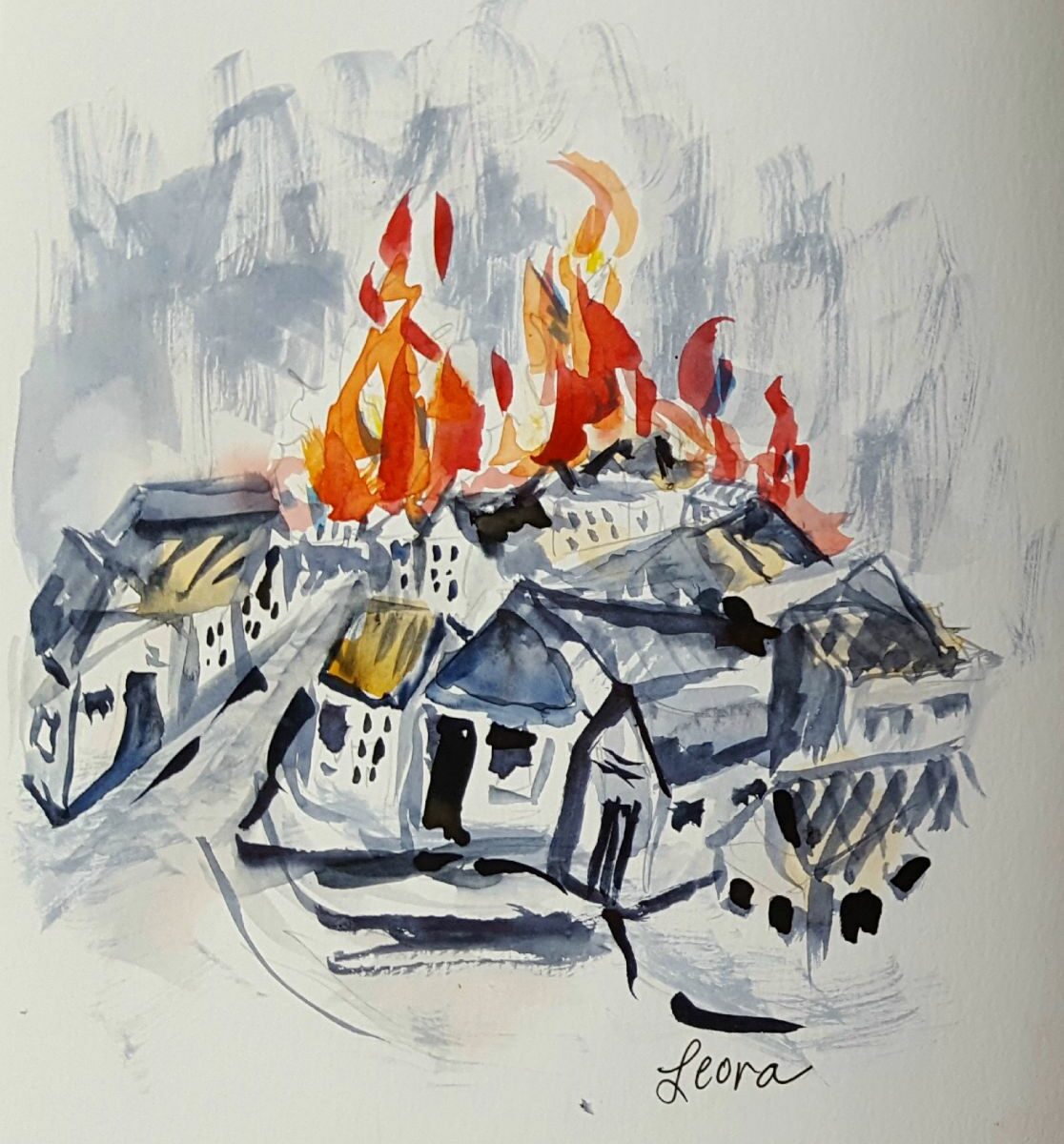 It is burning, brothers, it is burning.
Our poor little town, a pity, burns!
Furious winds blow,
Breaking, burning and scattering,
And you stand around
With folded arms.

How did Hitler take over a largely docile German people and turn them into rabid murderers? How does this question relate to us today, in the United States of America?

In the 1920s a group of German professors traveled all over the world, looking for a master race of people who started civilization. They could not find people who matched up with their imaginary measurements. So they decided the Germans are the master race. They called them Aryans — light-skinned, blonde, and blue-eyed. Ironically, the word Aryan was coined year before the Hitler era, from the word or, meaning light. The three top leaders of the Nazi party did not, however, look like the ideal Aryan. Children in some classrooms could look around at themselves and realize that no one in that particular class fit the Aryan image. With the use of propaganda, combined with a terror system and the Gestapo, the master race theory became a false reality.

Since the Germans decided themselves to be the master race, they assumed that they deserved to conquer the world. Today Germany, tomorrow the world. The propaganda was that all the problems of the world, including Germany’s loss in World War I, were caused by non-Aryans, especially Jews. Therefore, the Jews had to be exterminated, and their buildings, books, art, and music had to be destroyed. As it says in Psalm 83: “Come,” they say, “let us destroy them as a nation, so that Israel’s name is remembered no more.”

Back to our first question: how does this relate to what goes on today, in the United States? A reversal of the master race theory is emerging. In our schools and universities a new approach to American history is being taught: the country was created in 1619 by privileged white people on the backs of slaves. This legacy of slavery has existed throughout the years. The new theory preaches that the economic, health, environmental, educational, and housing problems in our country are due to this legacy. Black people are still oppressed through social, economic, and criminal inequality. That is our new false reality. Anyone who criticizes the narrative is called racist. People of color who do not agree with the new line of thinking are ignored or vilified.

And what is really going on? Civil rights laws have been in place for years. African Americans go to college and participate in the workforce in larger numbers than ever, holding leadership positions, doing research in universities, and raising children with many opportunities. There is a black caucus in Congress, and African Americans have been elected to political positions, including president. The only individual granted a national holiday is Martin Luther King. Every Starbucks type of incident is considered major news, giving the media a chance to run to Al Sharpton, so he can call for justice.

Is the Black Lives Matter movement a total mask to cover a totalitarian, antisemitic agenda? Echoes of the ‘Brown Shirt’ movement of pre-war Germany are emerging loud and clear. Learn about the beer hall ‘putsch’ and the rise of Nazi Germany from the book The Trial of Adolf Hitler by by David King:

… Hitler troops charged, pushing the police aside, seizing their weapons, and, in some cases, attacking them with rifle butts. Other people in the procession spit on the officers and insulted them. At least twenty-eight policemen were taken captive and marched back to the beer hall, their hands on their heads. This was described by later Nazi propaganda as “police fraternization.” (p. 96)

Further in the book David King mentions newspapers how The New York Times, The New York World, Berliner Tageblatt, and the Republic Francaise covered the beer hall putsch. The world media at that time believed that “the most dangerous of the adversaries was not the one suppressed at the Odeonsplatz. Hitler in his defeat looked ludicrous and less menacing than the state authorities who had stopped him. The illusion would only grow in the coming months.” (p. 117)

1923 events seems like today’s news. Do you see recent events repeating historical events? Has the Master Race Theory been turned upside-down and re-used?

And can we put out the fire? The poem Es Brent continues:

The bottom line is we have to pray and remember that all things come from God. Ein od milvado — there is none other like him. We are God’s heritage, and He will ultimately prevent the ‘inevitable’ from happening.

Note: this post was originally written as a letter to the editor in summer 2020.